Did you know that Iceland is one of the best places in the world to see whales throughout the whole year? Climb aboard one of our whale-watching boats and come with us to see the Whales in Iceland.  You can choose from different locations around the island such us Húsavík and Akureyri in the north or Reykjavík, the capital. Whale watching in Iceland is a must do activity during you Iceland trip. Check the whale watching tours in Iceland below and book in advance to experience an incredible adventure.

Where can I join a whale watching tour in Iceland?
Reykjavík, the capital of Iceland, and Húsavík and Akureyri, in the north, are the best spots to see whales in Iceland. You should choose according to your travel plans in Iceland.

Húsavík is considered the capital of whales and it is indeed the best place to get up close to these incredible mammals, but the tours are only available between March and November. The departures for whale watching in Húsavik are made from the port in the center of Húsavík, in traditional wooden boats and zodiac-type speedboats.

Also from the north, Akureyri is a good option if you travel between April and November. Departures are made from the port in the center of Akureyri to see whales in the Eyjafjordur fjord. The boats are large and modern, with all the comforts.

Reykjavík, on the other hand, has two great advantages. It is the capital and the place where countless other tours of Iceland begins. If you are in Iceland for a short getaway, Reykjavík is your place for whale watching. And the tours are running throughout the whole year!

There are also other locations in Iceland, such as, Grundarfjordur and Ólafsvík. If you are interested in taking a whale watching tour in these locations, don't hesitate to contact us!

When is the best time to do a whale watching tour in Iceland?
The best time to see whales in Iceland is between April and October, with an almost 100% probability of success during June, July and August. In the north and west of Iceland, whale watching excursions take place between March and November but in Reykjavík throughout the whole year.

How are the boats of the whale watching tours in Iceland?

There are different types of boats and for all tastes but we can divide whale watching excursions into two types: traditional boat tours and speedboat tours. The boat tours can be done in a modern boat or in a classic boat. You can see the characteristics of each boat on the reservation page of each whale watching tour.

What kind of whales can be seen in Iceland?
The most common whales in Iceland are the Minke whales but you can see up to 20 different types of whales, such as humpback whales, blue whales, pilot whales, toothed whales, sperm whales or killer whales, as well as different types of dolphins. Depending on the place and the season, there is more probability of seeing one type or the other.

What if I cannot see the whales during my tour in Iceland?
If the whales are not seen during the whale watching tour in Iceland, the supplier does not refund the money paid since the tour was carried out. But you will have the possiblity of joining the tour another day for free! Remember that the tour only goes if the conditions are good but the actual spotting of the whales cannot be guaranteed (The Atlantic Ocean is not a zoo and the whales are in their natural habitat). Having said so, between April and October there is a probability of almost 100% that the tour will be succesful.

Is it possible to see whales in Iceland when there are waves?
Yes, it is possible. The captains of the boats are experts in the field and if the excursion goes ahead it is because there is the possibility to see whales. However, safety comes first, and if the sea conditions are not good, the excursion is canceled in advance and you are entitled to a refund.

Is it possible to eat whale meat in Iceland?
Unfortunately, yes, it is possible to find restaurants where they sell whale meat. While it is true that the Icelandic tradition was to eat whales, this was a question of survival. Historically, they made the most of whale hunting and using every part of the whale, such as using their bones to burn and warm themselves. But today, hunting is no longer essential and they trade in it, so from here we recommend not eating it and we ask all of our customers to support the protection of whales. 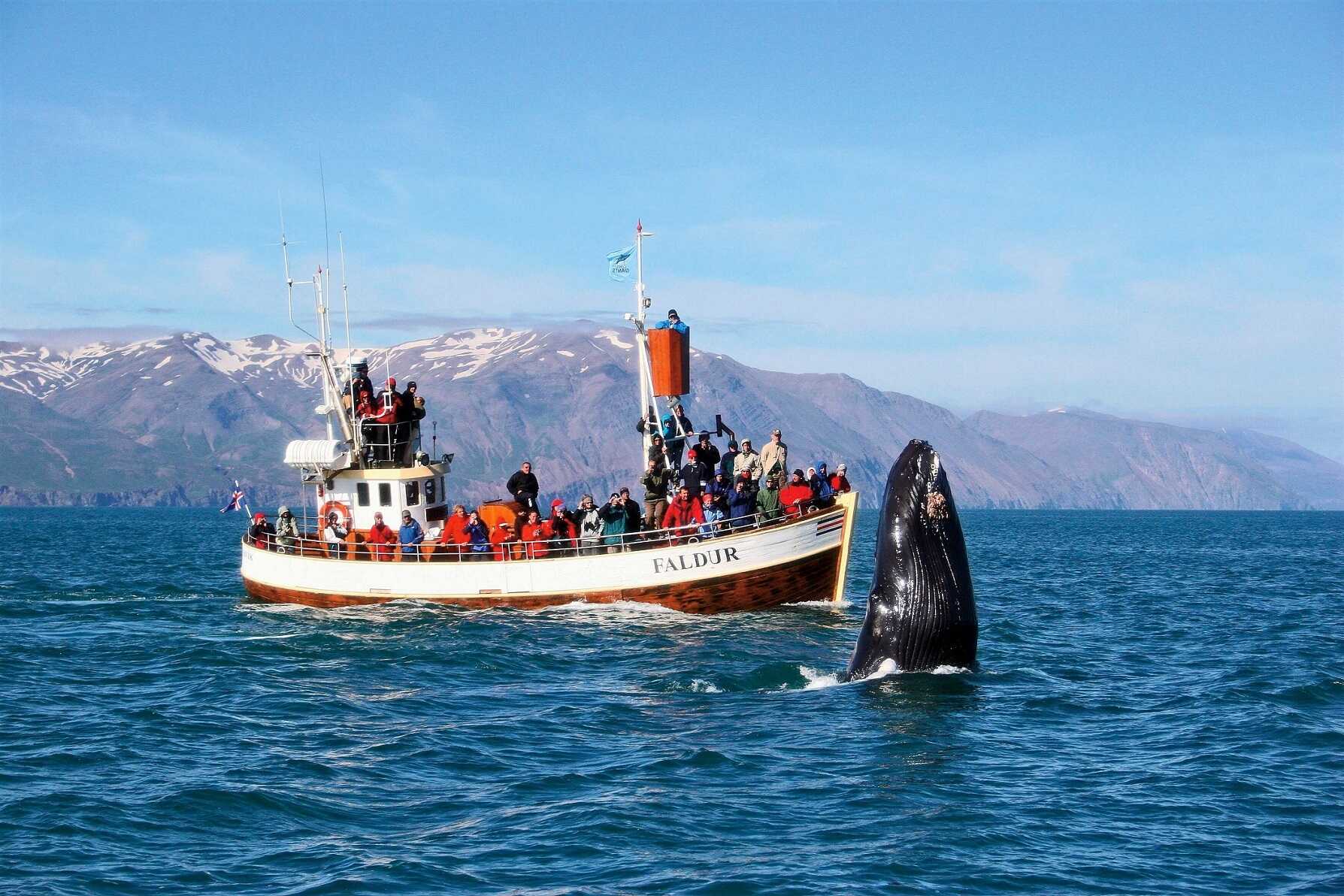 Pictures from the Whale watching tours in Iceland:

Important note: Whale watching in Iceland cannot be guaranteed.The Atlantic Ocean is not a ZOO. If the whales are not seen during the excursion, the provider does not refund the money paid since the tour was carried out. In the event that the whales were not seen, you will be offered to join another tour for free (subject to availability). ID 828